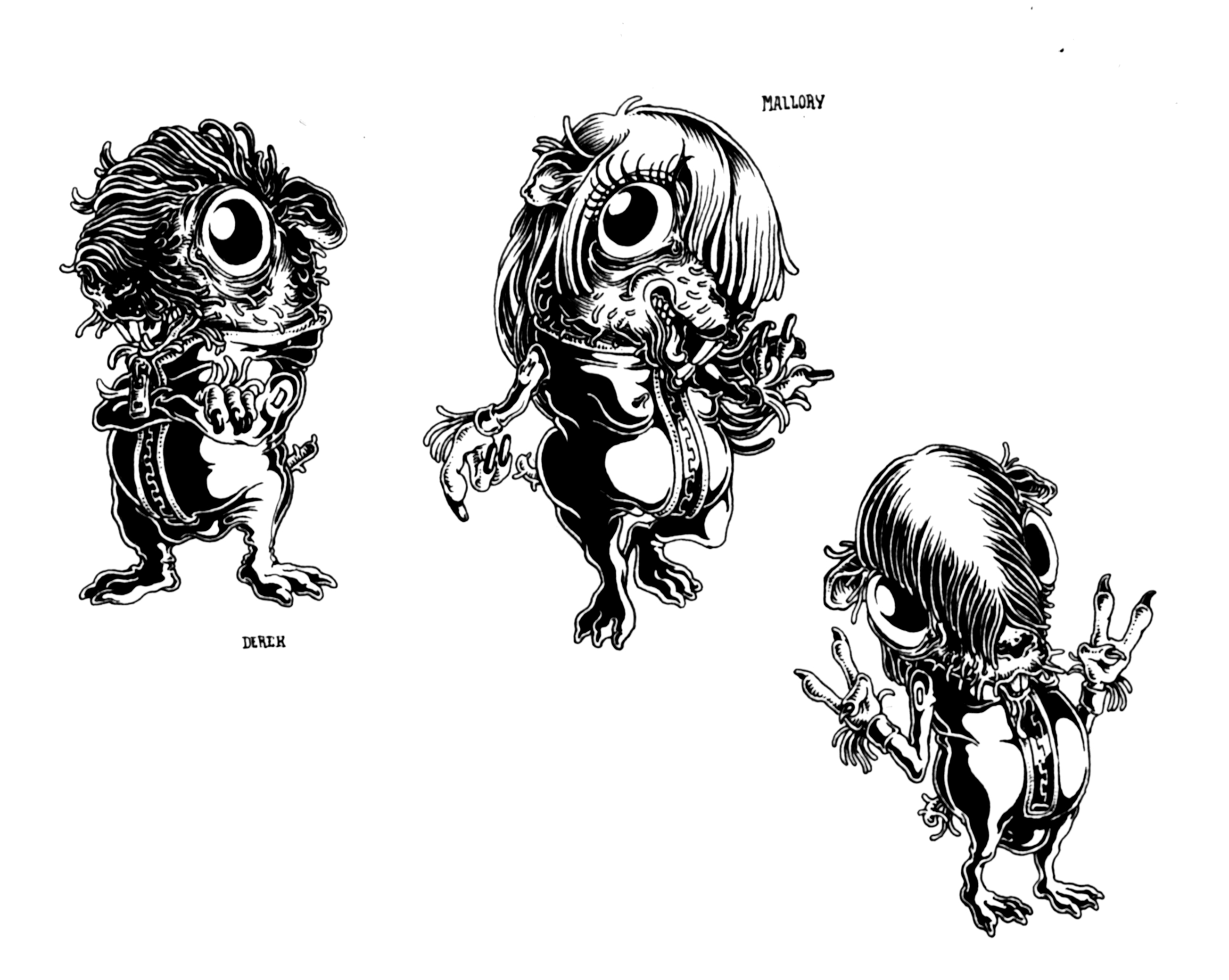 The psychedelic journey of Teké Gallery began with the exhibition dedicated to the claustrophobic and lysergic atmospheres of Gianluca Lerici a.k.a. Professor Bad Trip (born 1963) to continue in the gloomy and dystopian worlds, but with a strong punk/retro/ rockabilly flavor, by Igor Hofbauer (born in 1974) to then immerse himself in the geometric and boundless 8bit universe generated by the mind of Jesse Jacobs (class 1981).
Teké gallery arrives in its 5th year of activity proposing a young Spanish talent who in the recent years is finding more and more success and appreciation in the alternative comics festivals dedicated to the self-production worldwide: Carles García O’Dowd (Palma, 1988) better known as Carles G.O’D.
Carles, born at the end of the 80s, fully represents another generational leap of all that underground cultural movement born in the comic strip from the Sixties.
As in the works of the other authors of the gallery previously mentioned, also in those of G.O’D. the observer is kidnapped by the strong graphic ability to freely, rawly, without filters, represent the social and moral problems that afflict modern civilization by using characters and situations that are grotesque and almost unbelievable.
The spectator is forced to immerse himself in infinite microworlds, made up of dozens of levels, situations, characters. An overcrowded illustrative universe that fully reflects the type of society we are experiencing and in which the spirit of the Spanish artist was formed.
Unlike the other authors proposed (specially Bad Trip and Hofbauer), the playground in which Carles moves is the world of the web, of social media, of communication that is becoming faster and more immediate. Everything in the world is being simplified to allow people to be bombarded with even more stimuli and informations. Dialogue almost no longer exists and it is expressed only by short messages or icons, you must be rapid, immediate, always present, everywhere.
This acceleration of the modern times allows us to break down the concepts of distance and time. With a device and the right internet connection, we can be present at any time anywhere in the world. Announced in this way, it would seem like paradise, too bad that in the reality we live, this possibility of an internet world without borders, turns into a constant media bombardment of millions of advertisements that we no longer recognize even now, since how accustomed our eyes and our brains are to be bombed, lobotomized.
In the illustrations of G.O’D. the characters often with smiling and disturbing faces, dedicated to every kind of perversion, are crushed by the context, they become a part of the scenography they live. Totally immersed and camouflaged in these large metropolises full of billboards and advertising writings. A universe on the edge of Cyberpunk that brings us back to the minds of the future imagined in the 70s by movies like Blade Runner in a world that, however, has a structure of maddened levels that continue to grow, change and become labyrinthine making us lose it as in the cabinet of Dr. Caligari.
Carles G.O’D., divine architect, builder and creator of this world, entrusts the word to pure graphics and meaning to the mind of the viewer, immersed in a world halfway between social problems and the pop culture of stratified mass.
The artist manages to speak to us without words about strong themes that range from abortion to the problems linked to the mass tourism with a style that leaves ample space for imagination and, yet if the amount of informations never tires, allows us to appreciate every time the work as if it were the first time we look at it, always discovering new details and situations that we had missed at first.

To fully appreciate the non-verbal communication created by Carles in his works, just immerse yourself in the Úter project (created in collaboration with Tonina Matamalas),

a giant illustration that talk about the problems related to the debate on abortion in Spain. The theme, which is still experienced as a taboo in many parts of the world, has been developed in illustration through stories, testimonies, debates opened by people and translated by the author into a continuous universe that passes from history to history, from testimony to testimony, transmitting everything we need to know and about which we should ask ourselves.

The work was developed by G.O’D. in progress, as tales about the topic accumulated, the illustration continued to grow, like a huge puzzle that becomes increasingly intricate and whose solution lies only in the continuous debate and in trying to stop and think about the images we are looking at, without letting ourselves be bombarded passively.
Carles G.O’D., Witness of the times that are changing, narrator of our world that risks every day to shatter and crumble under the weight of their images.