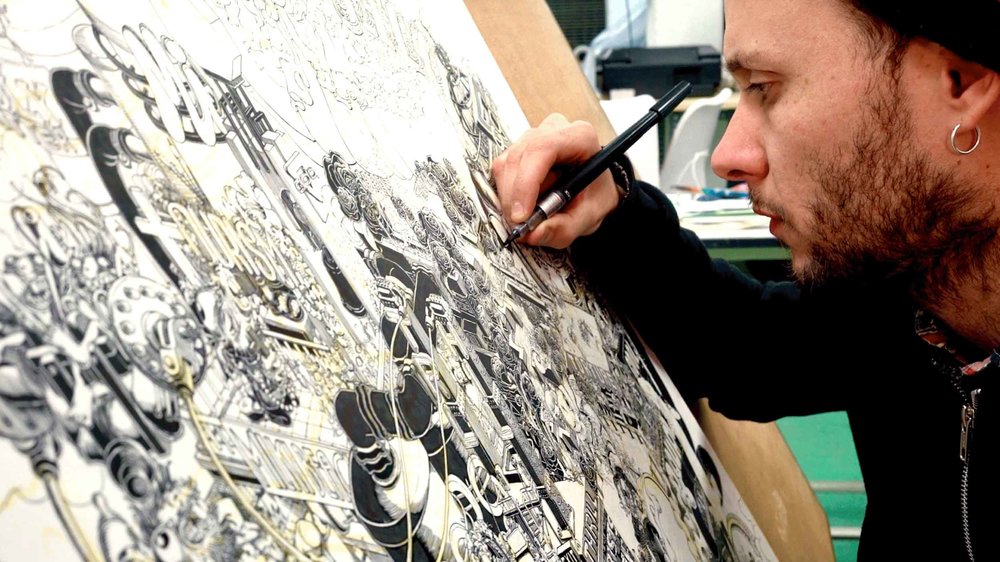 Carles Garcia O’Dowd aka G.O’D is a Spanish visual artist and illustrator born in Mallorca, in the Balearic Islands in 1988 by Castilian father and Irish mother.
Since he was a child his favorite activity has always been that of drawing intercalated with cartoons, comics, videogames, street games, tree climbing and snorkeling in the clear waters of the rocky beaches of Mallorca. He has always used drawing to escape from reality being the simplest and most natural way for him to reflect his thoughts without having to resort to the use of the word. As soon as he had the opportunity, in 2006, he moved to Barcelona to study at the Art Institute. Taking advantage of the Erasmus project, he lived and studied from 2008 to 2010 in Hamburg, Germany, then from 2010 to 2011 thanks to a scholarship, in Guadalajara, Mexico. During this time he discovered the underground scene thanks to the “Crack Festival! – Disruptive Comics” of Rome, where, as he himself stated in an interview, he was really “struck down” by the breadth, quality and variety of artistic proposals all strictly free of commercial and capitalist conventions. In 2011 he had his first work experience with the Beehive Collective in Maine, U.S.A. before finally returning to Barcelona and graduating in 2012. During the American experience as a member of the Beehive Collective, Carles knows the artist Pat Perry personally and takes the decision to dedicate his life to art. Carles’ style has been strongly influenced by pop culture, punk and cyberpunk, cartoons, video games, fanzines, self-productions and comics and then by travel, by antagonistic movements and in particular by the Queer Movement. Since 2008 he has contributed to the creation of many fanzines and collective publications and has participated in countless underground festivals around the world. From 2012 to 2013 he worked in Marseille, France, at Le Dernier Cri, where he deepened his screen printing technical knowledge under the guidance of Pakito Bolino. He then worked as co-editor of Bosta magazine and as co-organizer of the Gutter Fest in Barcelona and the Tropicana Dreams Festival in Palma de Mallorca. Beginning in January 2014, he worked on the Uter project, working for about two years with his friend Tonina Matamalas. This was the most successful project in which Carles was involved, which allowed him to get to know the theme of feminism, to travel to present work across Europe in over 15 different countries and to work alongside another person for years. The project was inspired by the debate that took place at that time in the Spanish parliament where the right demanded the abolition of free and free abortion. The heart of the project is a giant narrative drawing whose theme is the rights related to the management of women’s gestation. An intricate image that maps the descent into the field of extraneous forces when there is to decide about our bodies. It was entirely designed using metaphors to develop interaction and debate with the public on the subject of reproduction and abortion rights during project presentations. After dedicating himself to the coordination of a collective printing, screen printing and teaching center in Palma de Mallorca, he then started working from 2016 to today on the project “The Rise and Fall of Eden” (Heaven is a town much like Shagaluf) , a visual work that is part of a long project of prints dedicated to the creation of a cosmogony based on his personal vision of the neo-liberal society. This is also a project that starts with a giant design created between Palma de Mallorca and London that establishes a dialogue between the wild tourism industry on the Mediterranean coast of Majorca and the gentrification of a metropolis like London. The work involves workers and consumers, local inhabitants and tourists, natives and colonizers in an excessive, delirious and humorous graphic extravagance. A parody of cartoons in which symbolic creatures and entities converge in each print to take a look at particular scenes and moments in the history of this universe, conjecturing its chronicle little by little. In 2018, the project “The Rise and Fall of Eden” takes the form of a magnificent screen printed accordion book, Closer to Heaven, made with the italian publisher Strane Dizioni. From 2016 to today Carles is also carrying out another project that describes the dramatic side of romantic love whose title is based on a typically Spanish way of saying to indicate your soul mate and from the observation that instead it is something else. “No es tu media Naranja, es tu Exprimidor” – “It is not your sweetheart, it is your squeezer”. The project was accompanied by the creation of a small book entirely screen-printed by hand in four different colors by the artist. The works of Carles Garcia O’Dowd have been exhibited over the last few years in Spain, France, Great Britain, Switzerland, Italy, and China. The exhibition proposed by Tekè Gallery is the most complete so far dedicated to him.
And this is only the beginning.